This adventuresome lady is modeled after our maternal grandmother and Sally’s namesake, Sara Shorey.  Sara is representative of the women at the turn of the 20th century who “tramped” in full skirts and pantaloons. Our photographs of Grammie Shorey, taken by our grandfather, a professional photographer, give us the details of her garb.

Grammie and Papa Shorey loved to “tramp” (now called hiking) up the trails to reach the summits of the White Mountains of New Hampshire. Woman of the day were not allowed to wear pants and their boots had smooth soles making it difficult to navigate the steep, rocky trails.  Being resourceful, they modified their clothing and footwear so their treks would be more enjoyable.

They would sew inside pockets in their skirts, petticoats and pantaloons to hold their lunch and other supplies.  The tricky part was to “rearrange” the items so that they wouldn’t sit on their lunch when resting. The modifications to their boots would be to drive nails through the soles for traction and grip but as they made their way up the trails, the nails would start to press into the bottom of their feet making it very painful.

The Mountaineering Woman wears a full-skirted dress or skirt, and long pantaloons underneath. (It would be typical for her to also have several petticoats).
The long sleeve blouse has a high neck, which is usually tied with a ribbon tie. Around her waist is tied a hand-knit sweater for the breezy summit. On her back is a canvas knapsack, and tied to the top is a bedroll. Our woman wears a wide brim felt hat to protect her pale complexion, and a walking stick helps her navigate the rock-strewn paths. One foot rests on a granite rock as she pauses to appreciate the view. 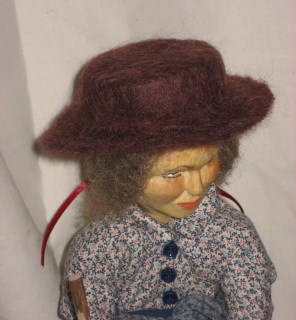