Papa Shorey was our longest living grandparent and we have lots of wonderful memories of our favorite grandparent.

Often we would go to his studio after school and each time he would give each of us a penny telling us we could either save the penny to add it to our savings or we could spent it at the drug store on candy.  Needless to say, we usually spent it on penny candy but our decisions could take hours (or at least it seemed that way).

Papa Shorey was a self taught photographer starting in his teenage years up until his death in 1961.  In many ways he was ahead of his time with some techniques. One of my favorites was he would lug his camera (weighing 10-25 pounds) up the mountain with a group of hikers – when they would stop to rest or had reached their destination, he would take their pictures then run down to his studio – develop the photographs and have them ready to sell to the group upon their return.

He was known as a White Mountain Photographer with impressive panoramic views of the mountains and images of Berlin and Gorham, his hometown. In 1915 he very kindly sent the Appalachia Magazine three remarkable photographs taken in the late summer of frost feathers on Mt. Washington. He had a lifetime membership with the AMC and often contributed his time energy and talents to them.

All of these memories and stories inspired me to create this figure with his 11” X 17” camera. He was always dressed in a shirt and tie and very often in a suit. 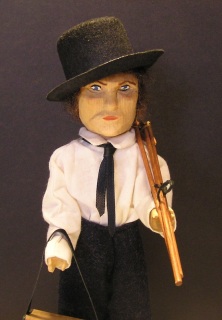