The only son of John Boothman and Sarah Kelsey was born at the Boothman House on Randolph Hill July 24, 1868. John was 9 when his father died, but he inherited his paternal carpentry abilities.  He learned the trade from Mr. McGivney of Berlin.

The first three houses John built in Randolph are showpieces, and still stand today in the Randolph valley.  He went on to build many homes in Randolph, especially summer homes in the Craftsman style.

I just barely remember Papa Boothman as he died when I was four years old but I loved listening to my dad tell the stories of what Papa Boothman accomplished.  My favorite and the one that inspired me to create the first figure of him is noted below titled “The winter he never saw daylight”.

John H Boothman and his crew build a large summer inn during the summer of 1915. They worked hard to have the structure up and closed in before winter. With that accomplished, they could work on the interior during the winter and have it completed by spring.

During that winter he and his crew had to snowshoe through the woods about 2 ½ miles to the building all before sunrise, worked inside all day and returned home after the sun went down. They followed this routine six days a week. The summer inn was ready in the spring. 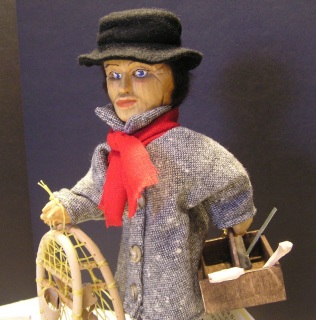